Waveland began as 2,000 acres of wilderness until it was surveyed and converted into the estate. Family tradition claims that it was Daniel Boone who initially surveyed the estate for his nephew Daniel Boone Bryan. Thus, the Bryans and many of their neighbors settled in the Waveland Estate, also known as Bryan's Station, and started along the road to creating a successful plantation. Thus Daniel Bryan and his son Joseph built up the estate, and included a gun shop, a gristmill,  a blacksmith shop, a distillery, and a paper mill. The entire estate employed over 30 paid workers, and  included a Baptist Church and one of the first established schools for females in the state.

Of course, none of this success would have been possible without the work of numerous slaves that tended to the land and industries. There were multiple distinct classes of slaves, including the slaves that worked in the house. 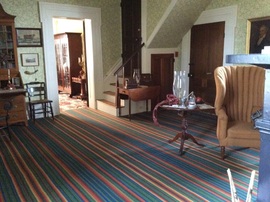 After the death of Daniel Bryan, his son Joseph Bryan decided to build a new, more showy estate to please his wife, and tore down the old stone house.  Joseph Bryan was the favorite son of Daniel, and thus inherited the entire property. He hired Lexingtonian Washington Allen to build a house in the Greek Revival style popular with farmers at the time. Most of the materials for the house came from the Bryan plantation itself: the bricks were burned on site, the iron was crafted in the blacksmith's shop, and even the lumber was felled on the property. The stone for the foundations, one of the few foreign materials, was quarried nearby on the Kentucky River and transported to the estate for refinement.

Years later, the mansion was completed: ionic columns and doorways seemingly plucked from the Acropolis, long porches and porticos on either side, and 14 spacious rooms with high ceilings for temperature regulation. Walls were constructed from bricks made from mud on the Waveland property, and were built three bricks wide to prevent drafts. The house did not include a ballroom in the addition, as the family was a close friend to Alexander Campbell, a leader in the Religious Restoration movement who opposed dancing and other frivolous activity.

Margaret Bryan, Joseph's husband, and wanted the interior of the house to be well-decorated. Waveland was the first house with wall-to-wall carpeting in the United States, an unimaginable luxury at the time. In addition, the house contained a large amount of silver dinnerware so pure that an accidental bite could leave a permanent mark. However, Joseph attempted to avoid many of the extravagances his wife desired: for instance, though Margaret wanted to install black marble fireplaces and baseboards, but Joseph had wooden ones added instead. When his wife  voiced her complaints about the change, Joseph came in with black paint and sloshed it along the wood. "There's your black marble," he said.

Joseph Bryan was a wealthy man, but a poor manager of his finances. (In fact, the only thing he was truly good at was raising race horses, one of which was bought by William Rockefeller.) He drank and gambled, losing money quickly and angering his creditors, who eventually demanded payment of debts. Joseph was forced to mortgage the estate and sell much of its furniture. As the auction went on, Joseph sat on the side porch of the house with a glass of brandy and his pet mockingbird, unwilling to accept the loss. Every one of his eleven children stopped talking to him, and he would die poor, never accepting his situation.

The hour-long tour covers the Bryan estate, slave quarters, smokehouse and ice house. Each tour begins at the front of the Bryan household, where guides will begin to share fascinating information that gives visitors a look into the lives of those who lived at Waveland. Visitors are led through numerous rooms including bedrooms, dining room, and the sitting room, each of which has artfully arranged furniture and artifacts. The stories are not repetitive as the tour feels like a trip through history. Never will visitors ever feel overwhelmed by the experience. After touring the house, visitors are led to the slave quarters, where they will be able to observe the living conditions of Waveland slaves. The tour concludes with visits to both the smokehouse and ice house. While it is not an extravagant presentation, it is still a highly enjoyable trip for everybody.

Each artifact and room is perfectly set up to better create a tour that covers every aspect of the Bryan's household. The tour guides are especially helpful, answering any questions visitors may have. But one of the best things about the site is that it's employees are honest. The guide spoke honestly about how Waveland became a museum. The museum is constantly expanding and growing. At the time that the Dunbar History Club toured, the site had been working to add other rooms and exhibits to the tour. Waveland was not just like any other museum, but one that is changing and expanding.